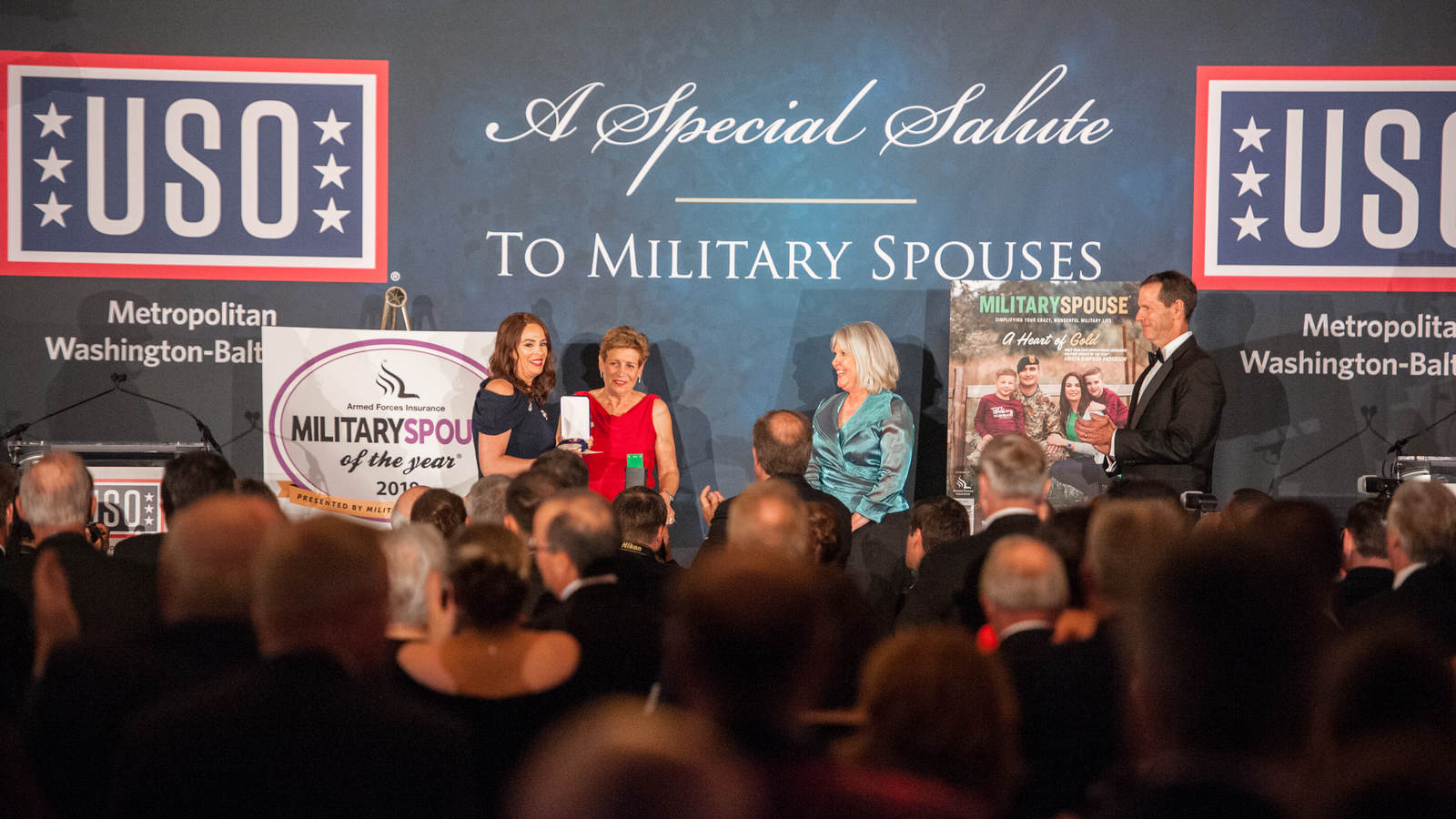 From highly ranked military personnel to former Super Bowl champions, USO of Metropolitan Washington-Baltimore’s 36th Annual Awards Dinner was packed with more than 800 USO-Metro supporters from all over the National Capital Region on Thursday night. This year’s remarkable celebration of the service and sacrifice of the United States Armed Forces specifically highlighted the commitment and dedication of our nation’s Military Spouses. The night was filled with great laughs and excitement as Master of Ceremonies and NFL Hall of Famer, Terry Bradshaw, entertained a lively crowd between presentations of the USO-Metro Patriot Award, USO-Metro Legacy of Hope Award, and for the first time ever, the announcement of the Armed Forces Insurance Military Spouse of the Year.

As hundreds of USO-Metro supporters gathered at the Omni Shoreham, the night was kicked off with opening remarks from Chairman of the Annual Awards Dinner Committee, Steve O'Keeffe, and Chairman of the USO of Metropolitan Washington-Baltimore, Paul McQuillan. “We can’t thank everyone enough for attending this event that not only recognizes the sacrifice of so many, but benefits our organization’s mission to connect our local service members with family, home, and country.”

O'Keeffe then took the opportunity announce the event had raised over one-million dollars for USO-Metro programs, events, and centers. “Tonight would not be possible without the generosity of our sponsors.” O'Keeffe recognized each corporate sponsor:

Presenting Sponsor of the Annual Awards Dinner, The Boeing Company, was recognized for it’s continued support of USO-Metro programs, events, and centers, including, but not limited to, it’s contribution of USO-Metro’s Mobile USO. McQuillan stated “This Mobile allows us to support and provide USO programs and services to local military members and their families at 27 area installations. Without this Mobile USO, we would not be able to reach tens of thousands of service members throughout our region every year.” 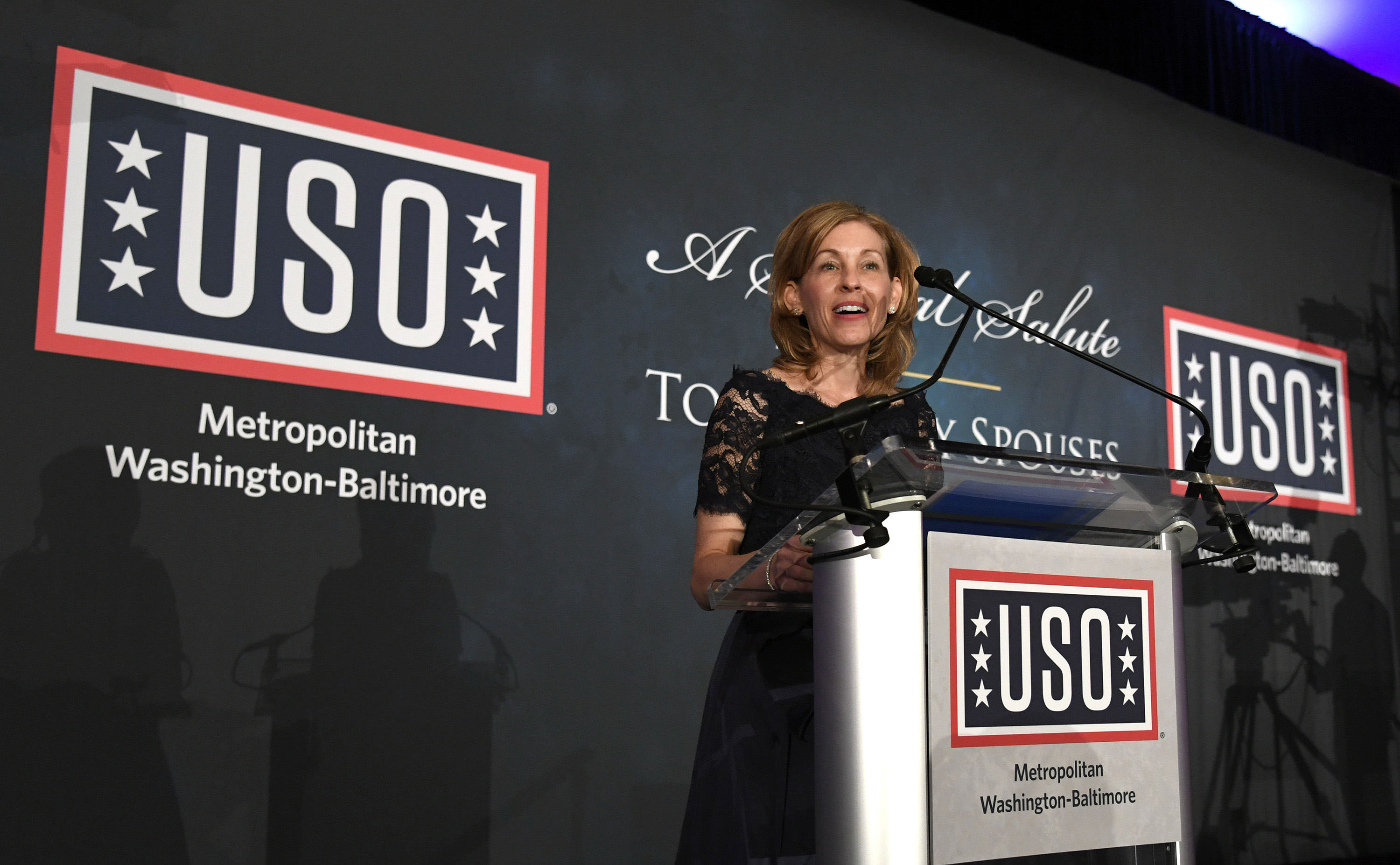 The Boeing Defense President and CEO, Ms. Leanne Caret, was welcomed to the stage and followed McQuillan by thanking the USO-Metro staff for the event highlighting the sacrifice of the Military Spouse. “This evening, one word stands out to me, unparalleled… The valiant service being performed on the homefront by military spouses is worth recognizing and worth celebrating. And it is my great honor to help us do exactly that this evening.”

Following the presentation of the colors by the Military District of Washington’s Joint Services Color Guard and Fife and Drum Corps, the National Anthem was brilliantly performed by American guitarist and founding member of Steely Dan, Jeffery “Skunk” Baxter.

Kellie Pickler Performs “If It Wasn’t for a Woman” 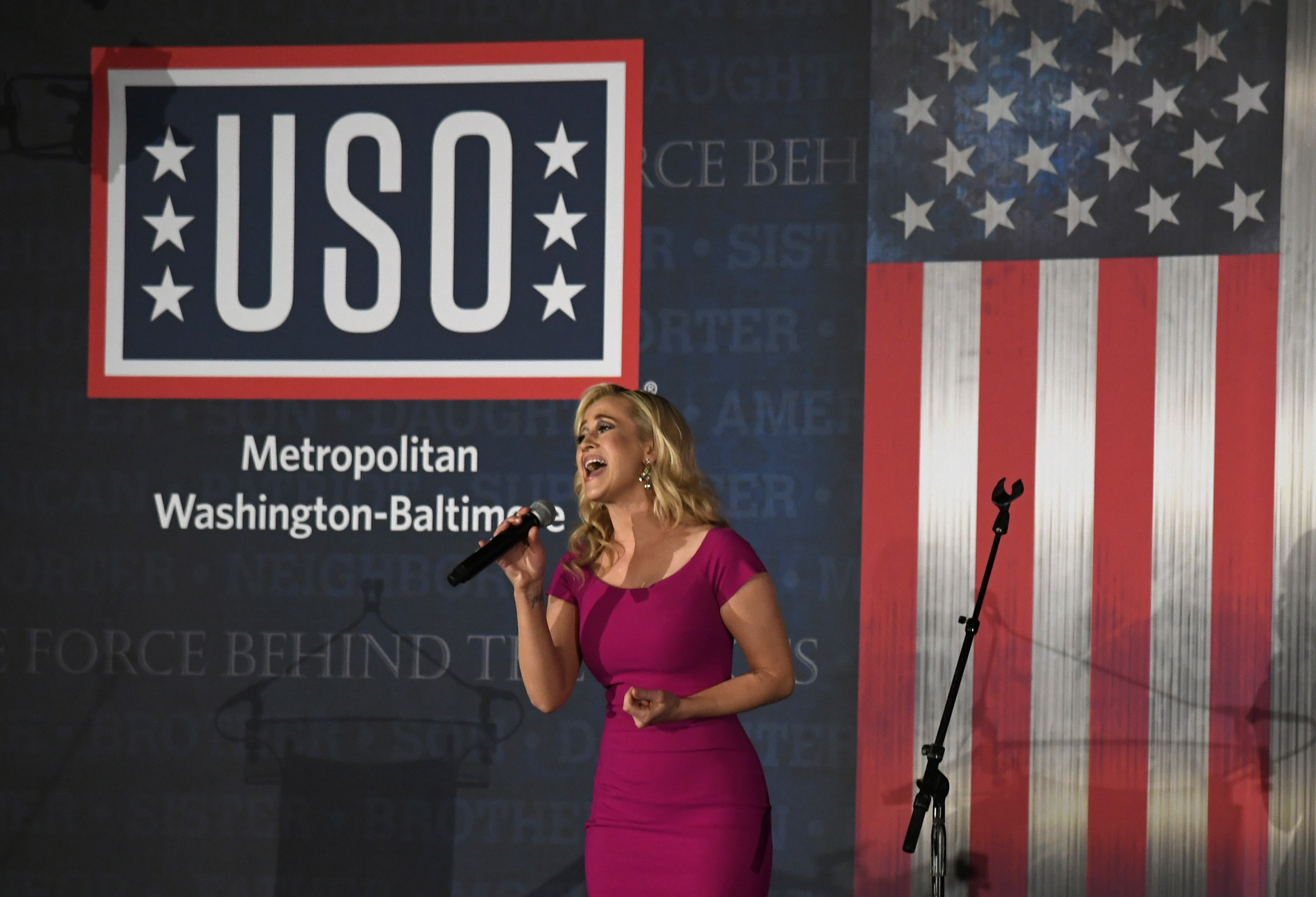 Kellie Pickler, a known advocate for supporting our Nation’s armed forces and long-time supporter of the USO, surprised the entire crowd when she was introduced as a guest performer. Pickler performed her most recent single “If It Wasn’t for a Woman,” in honor of the overall theme in saluting United States Military Spouses. 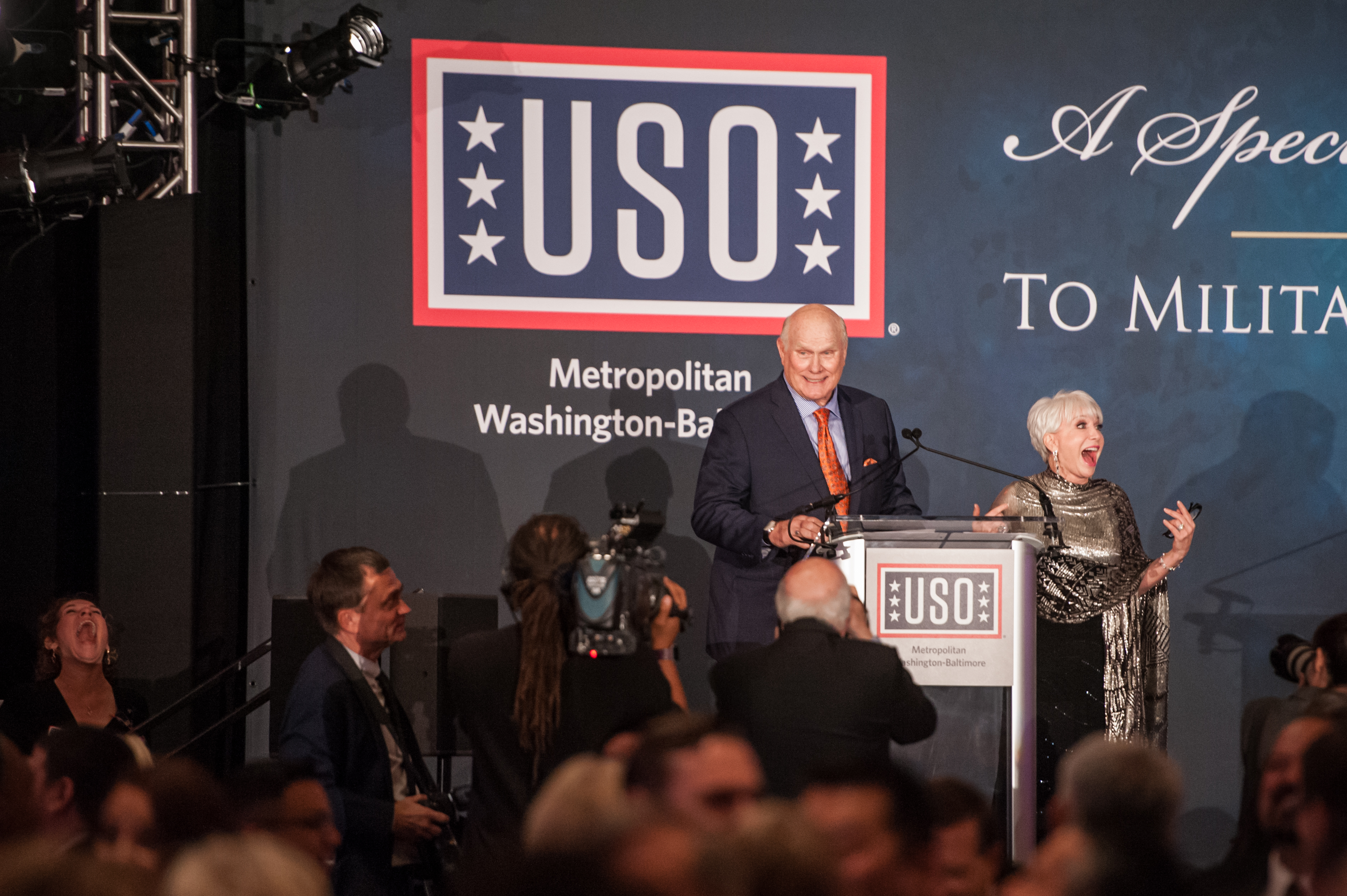 NFL Hall of Famer, four-time Super Bowl Champion, and long-time TV sports analyst, Terry Bradshaw, was named the 36th Annual Awards Dinner Master of Ceremonies. Bradshaw, a long-time supporter of the USO, was presented the 2017 Merit Award at last year’s event. He’s a known advocate for supporting our men and women in uniform, and specifically focusing on the importance of mental health. 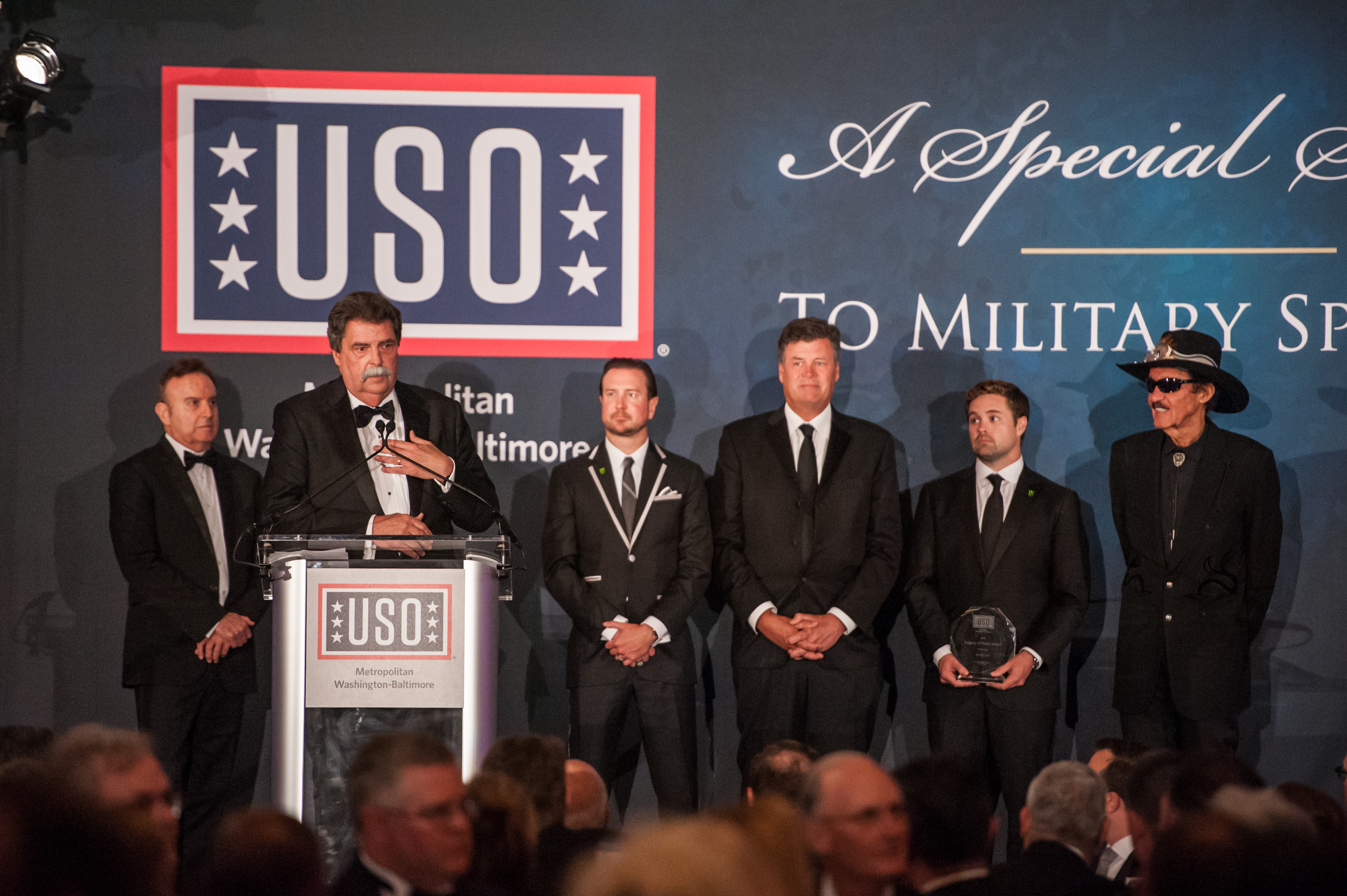 President of USO-Metro, Elaine Rogers, then came to announce the 2018 Legacy of Hope Award Recipient with the 2016 Legacy of Hope Recipient and USO-Metro Board Member, Hilton Schlosberg - President and COO of Monster Energy. Rogers explained, “The Legacy of Hope Award recognizes the selfless hours that celebrities, members of the entertainment industry and other organizations spend boosting the morale of men and women who protect our freedoms every day.” NASCAR is being honored for their ongoing partnership with the USO and their steadfast commitment to the Military community through their own Military Programs: NASCAR Salutes, Honoring Gold Star Families, and NASCAR Troops to the Track. 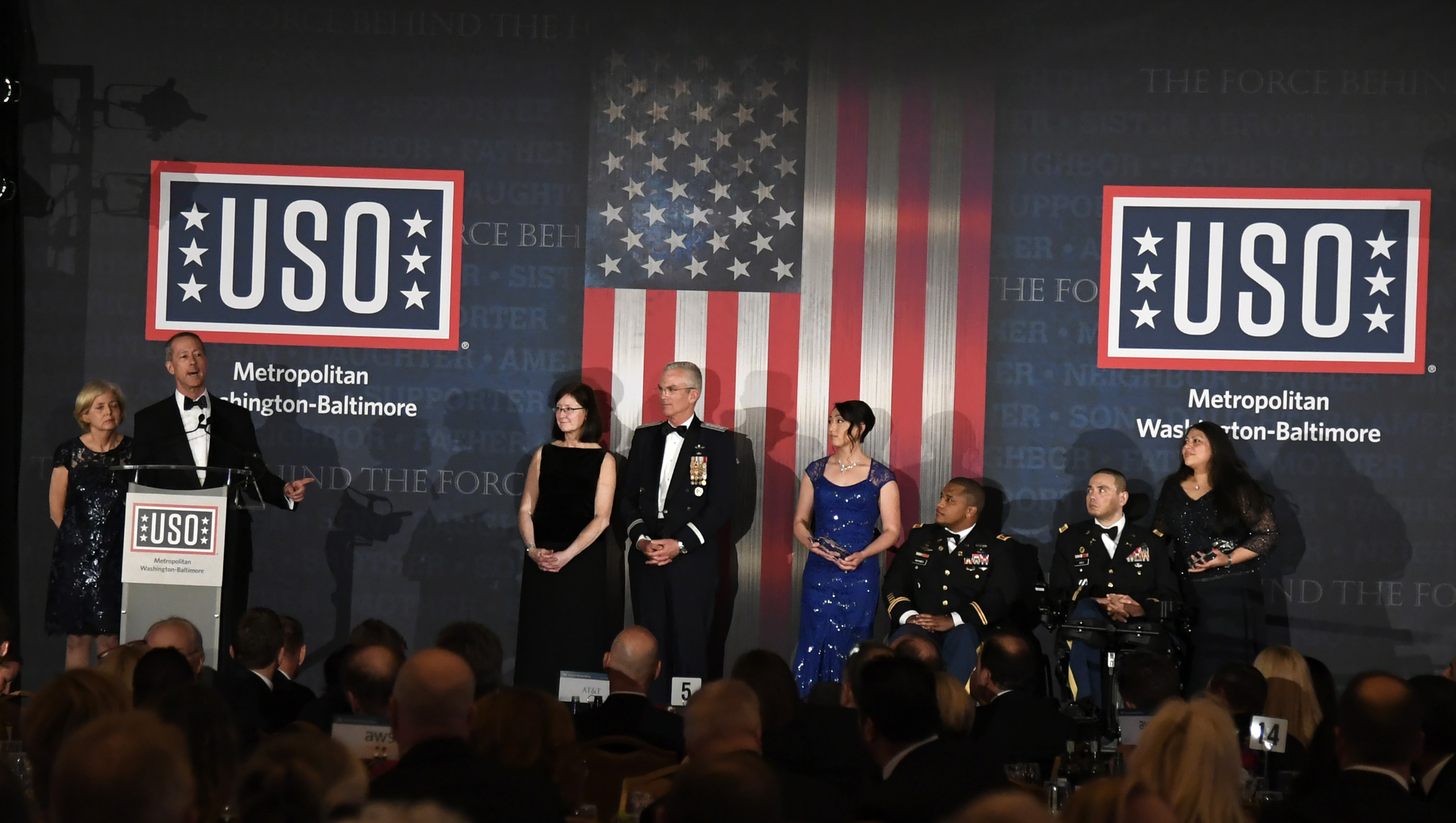 USO-Metro was proud to present this year’s Patriot Award to Congressman Mac Thornberry, Chairman of the House Armed Services Committee, and Mrs. Sally Thornberry, a dedicated USO-Metro volunteer representing all USO volunteers who give so much of their time and love to our nation’s service members and their families. Mrs. Thornberry also serves on USO-Metro’s Honorary Board of Director’s Committee.

General Paul Selva, Vice-Chairman of the Joint Chiefs of Staff, and his spouse, Mrs. Ricki Selva, introduced the Thornberry’s to the stage.

Medal of Honor Recipient, Captain Florent Groberg, was brought to the stage to highlight the night’s USO Service Moment. Captain Groberg reminisced on the Las Vegas excursion USO-Metro had sent him on a few years back when he was recovering from injuries at Walter Reed National Military Medical Center at Bethesda. The excursion was a part of Salute to Our Troops, which USO-Metro holds annually to bring ill, wounded, and injured, military families out of hospitals and off military bases to connect and experience a once-in-a-lifetime opportunity. He introduced Courtnee Crum, a participant in last year’s USO-Metro’s excursion, where service members or their families battling cancer and their families were sent to Disneyland in Orlando, Florida, for a week.

Before announcing the 2018 Armed Forces Insurance Military Spouse of the Year, Lt Gen (Ret.) Stanley E. Clarke, Chairman for Armed Forces Insurance Board of Directors, took a moment to highlight the 2017 Military Spouse of the Year, Brittany Boccher. As Ms. Boccher sat in attendance, GEN. Clarke gave his remarks: “Within one minute of speaking to Brittany, I was beyond impressed with her composure, sincerity, and composure. As a military spouse, Brittany not only supports her military family, she extends her care to others that serve as well.” 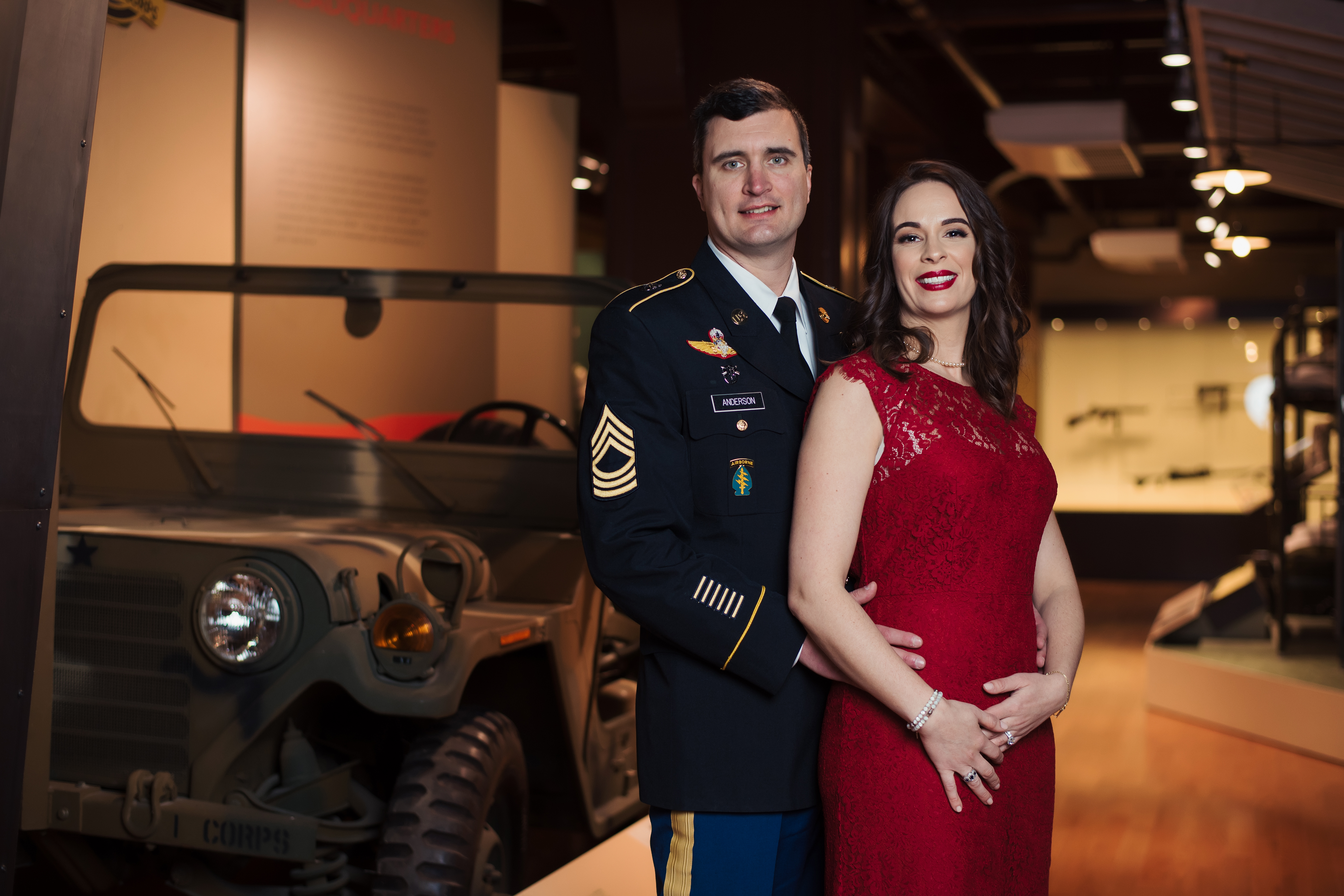 Krista’s selfless service to her fellow military families and to her community, along with the respect of her peers, have earned her this award… Mom of two boys, spouse of MSG Anderson, Krista Simpson Anderson is someone who makes all of us proud to be a part of this Army family. 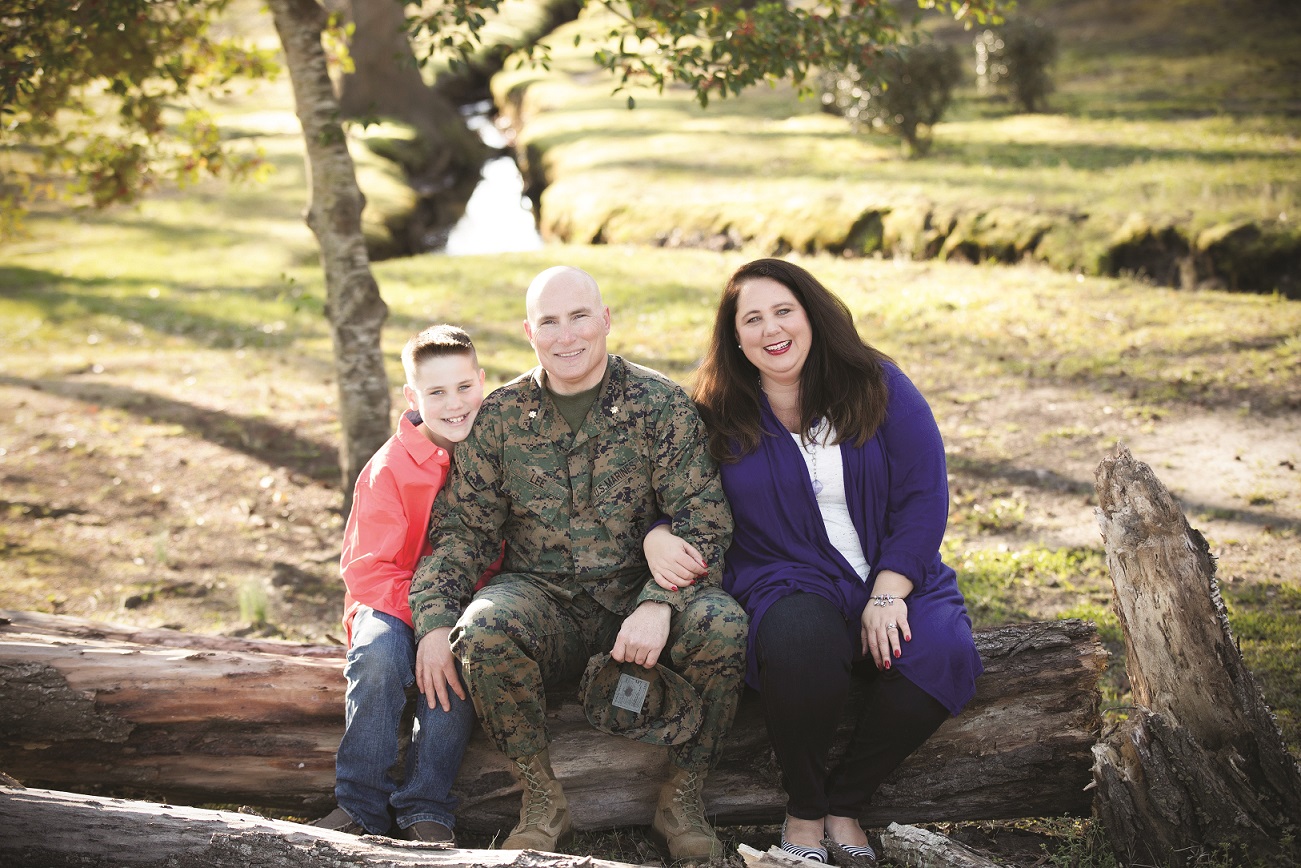 Jolynn has committed her life to being that person who is helping to pull those who are hurting back on their feet… You make the Marine Corps Proud. 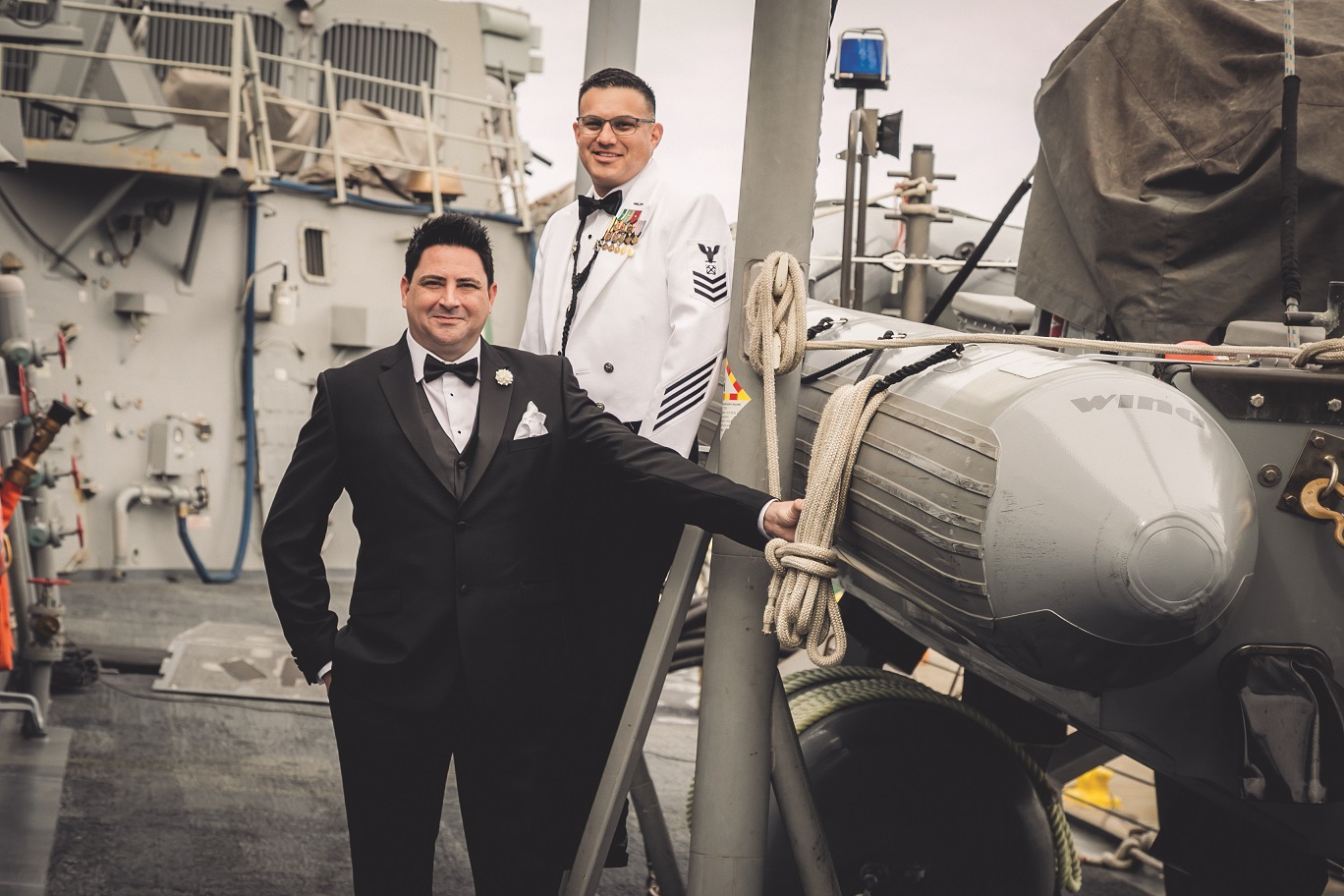 Brian says that being a military spouse is the honor of his life. His compassion and enthusiasm is an inspiration to those who have the opportunity to meet him… You are very deserving of this honor and are a military spouse we are proud to know and recognize tonight. 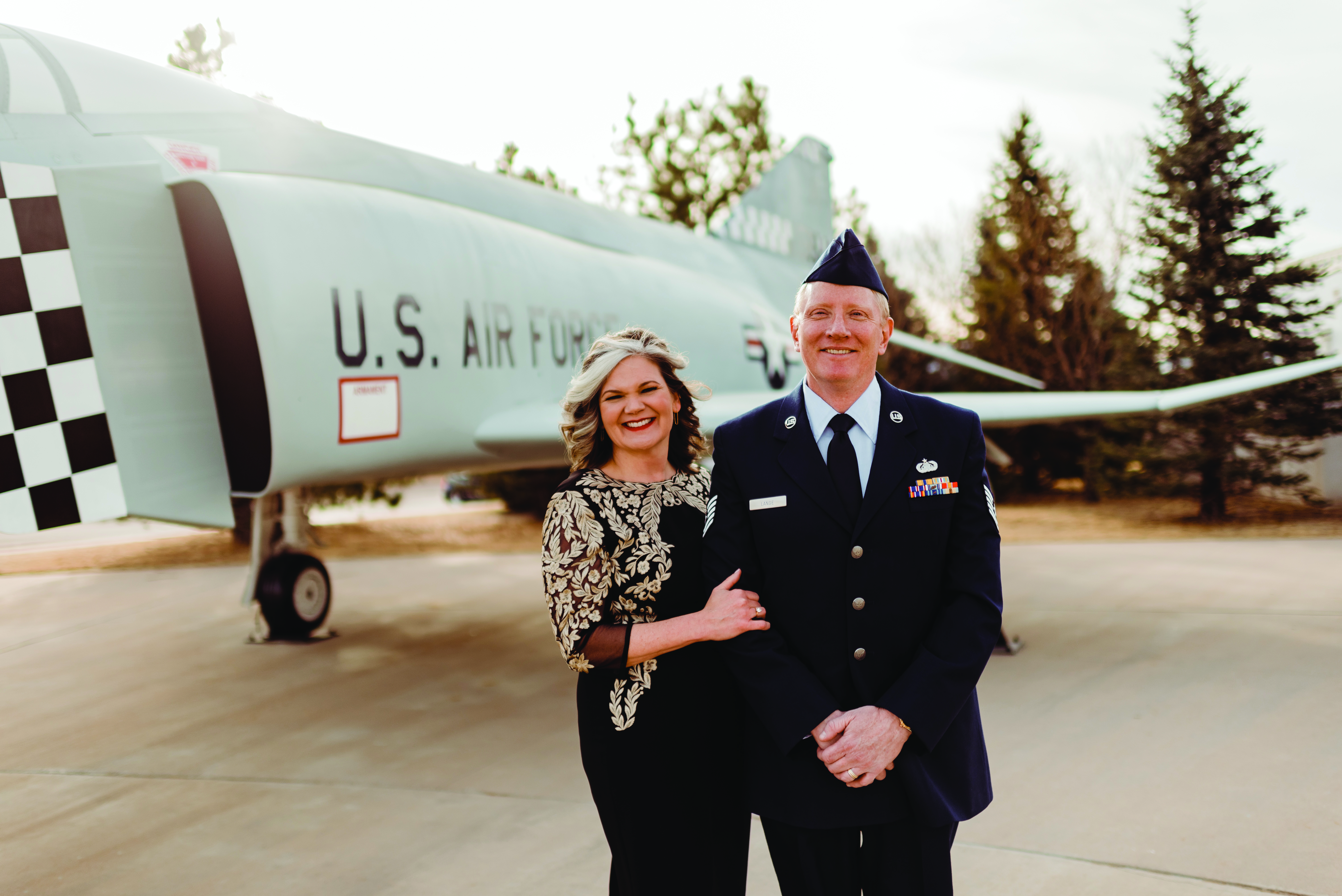 Kristen’s courage and work for our airmen and their families are why she has won this award. As Kristen likes to say, there is a silver lining to every challenge, and it is the attitude and persistence to present Kristen this recognition for all that she has done for the Air Force Community. 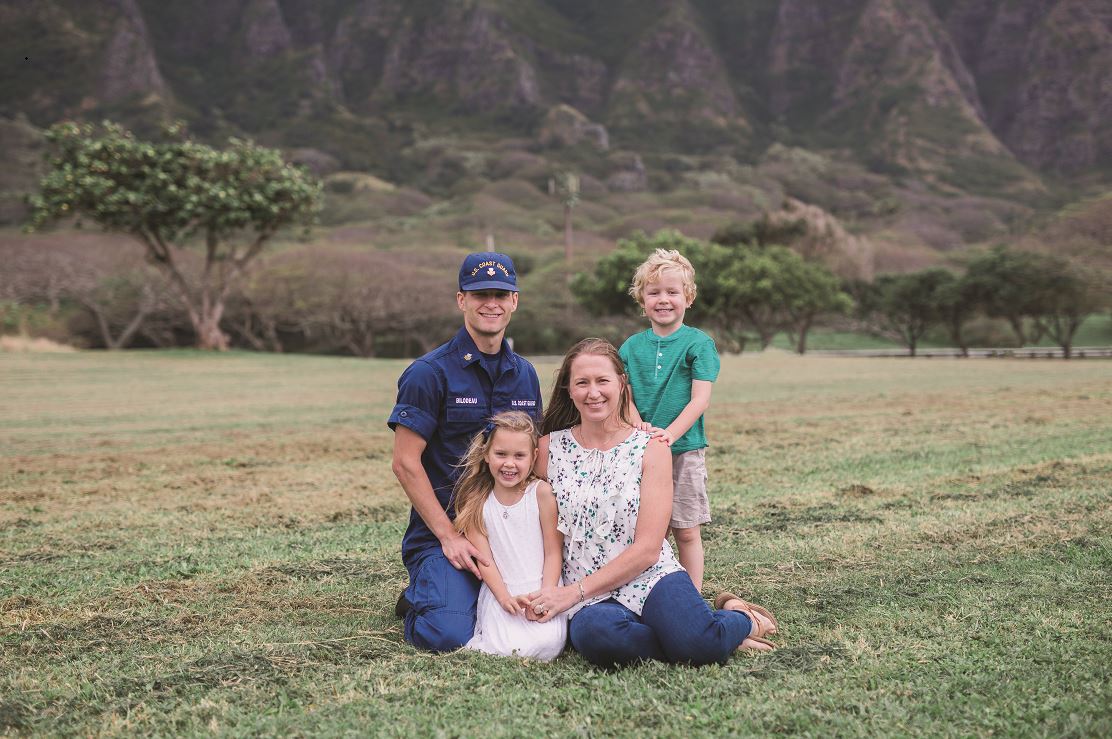 Stacy is an example of how military spouses can share their immense skills to benefit those who are around them… We are very proud of you. Spouses like you make us all stronger. 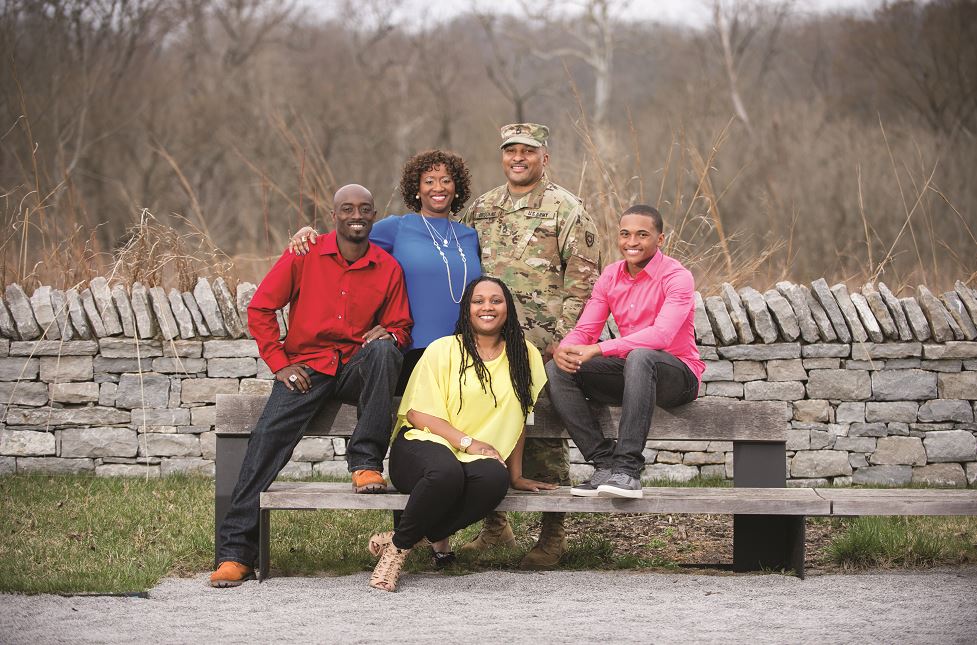 Sheila truly understands the sacrifices that our National Guard families make and advocates for the changes that will help them meet the demands we place on them. It is an honor to present you with this award tonight. 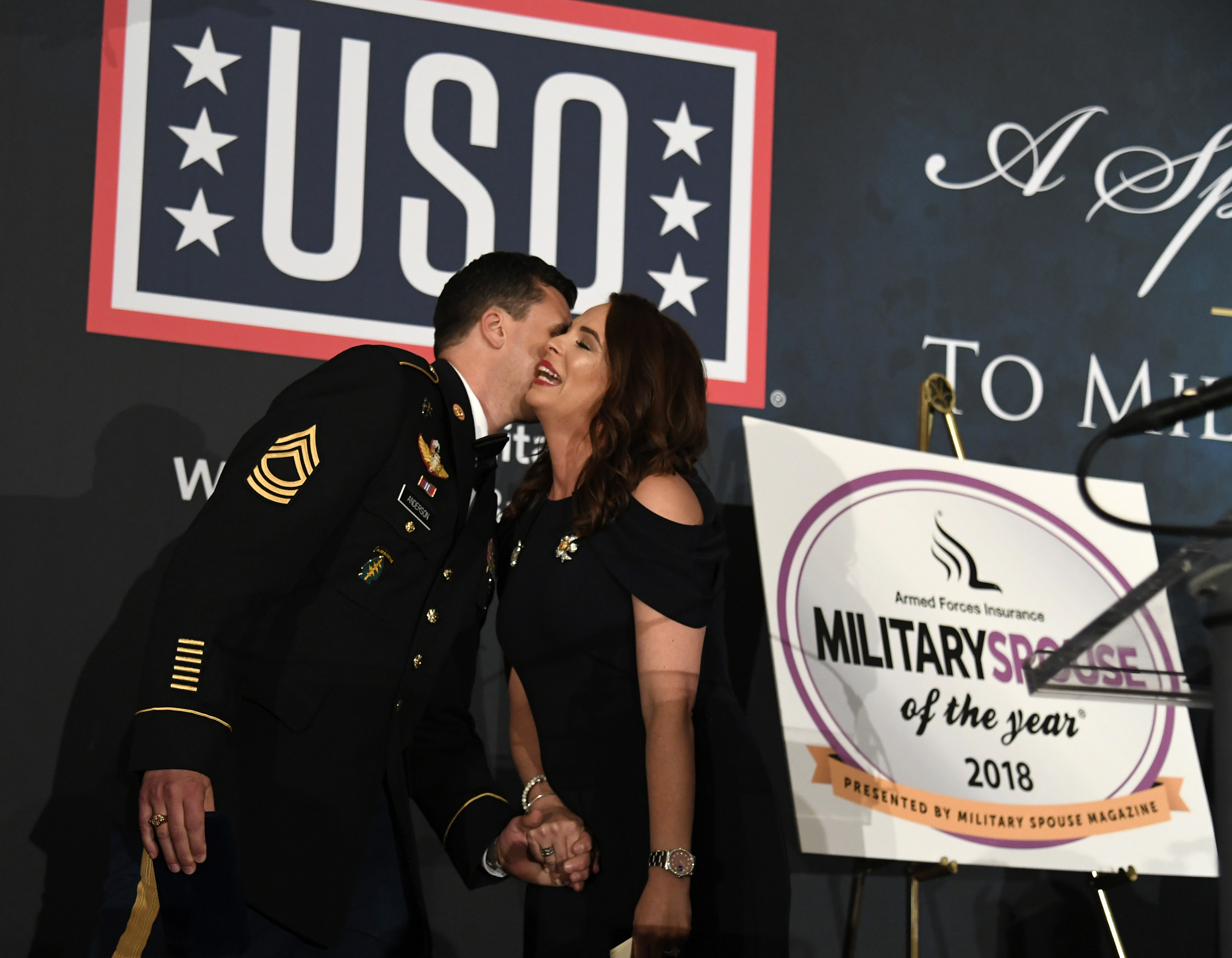 After months of anticipation, and thousands of votes, Mrs. Krista Simpson Anderson, spouse of MSG Gus. E Anderson IV, was announced as the 2018 Armed Forces Insurance Military Spouse of the Year!

For full remarks and introductions of the 2018 Military Spouses of the Year: